This meme sparked a huge fight on my spouse’s Facebook page yesterday: 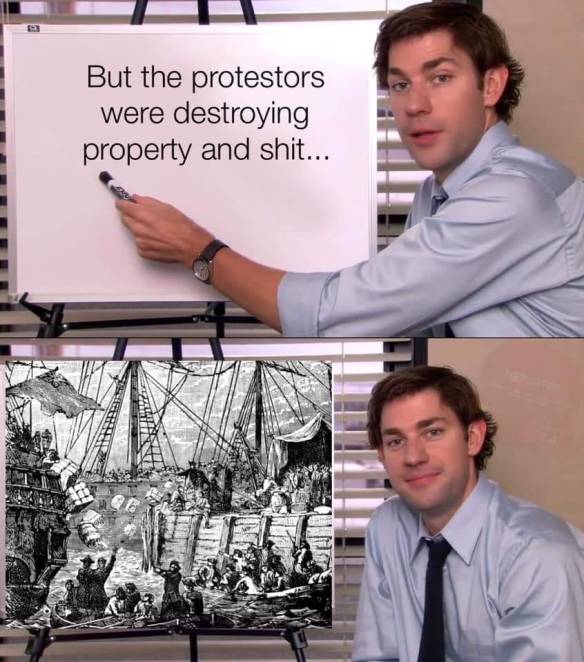 “But that’s DIFFERENT!” cried several commenters. “The Boston Tea Party participants were going after the actual source of the oppression, not looting some random Target store!”

I’m over how badly U.S. schools teach our own history, but I’m not over writing long-winded educational articles about it.

The Minneapolis protests and the Boston Tea Party have a great deal in common – but today’s “Tea Partiers” are almost certainly not on the side Hancock and Adams occupied in 1773.

Here’s what to know so you don’t pants yourself refuting Boston Tea Party/Minneapolis protest comparisons. 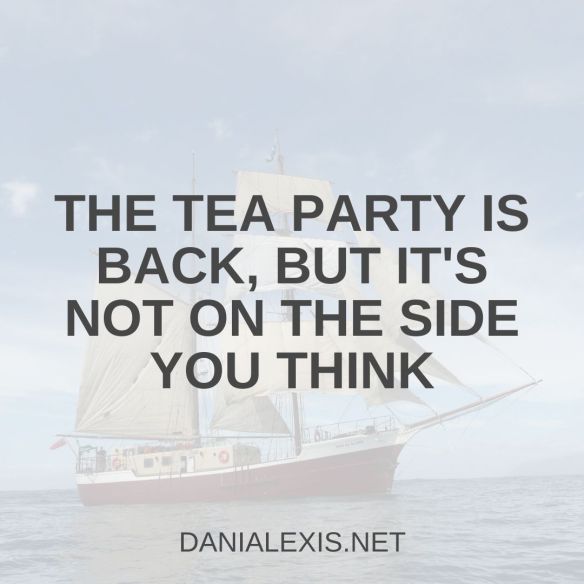 One of the first arguments I encountered in response to this meme was that the Boston Tea Partiers were “addressing the source of the problem,” whereas the Minneapolis protestors were taking their frustration out on an “innocent” business.

During the protests sparked by the police-perpetrated homicide* of George Floyd, a Target store in Minneapolis was looted. The photos appear to show damage both to store fixtures and possibly to the structure itself from flooding, which may have been caused when the sprinkler system deployed.

Critics are correct that Target’s inventory inside this store doesn’t belong to the federal government or to the state of Minneapolis. They are wrong, however, in their implication that the tea destroyed in Boston in 1773 belonged to the British government.

Rather, the tea belonged to the British East India Company, a private corporation – one that eventually controlled half of the world’s trade in various goods.

Both Target and the East India Company are/were involved in politics.

Both the East India Company and Target are private companies, not government entities. “Private company,” however, shouldn’t be taken to imply that either company has (or had) no connection to their respective governments.

Corporations don’t exist by fiat. Rather, they are chartered by a state or federal government, which recognizes them as a legal entity distinct from their leaders’ identities and grants them the right to behave as such.

Like many businesses before and since, both the East India Company and Target exist(ed) as corporations by the grace of their respective governments. The East India Company was chartered by the Crown in 1600; Target was incorporated in Minnesota in 1902 (as “Dayton’s Dry Goods”).

And both the East India Company and Target involve(d) themselves in the politics of their respective chartering entities.

In a speech given to the House of Commons in 1833, Lord Macaulay explained that “the Company’s commercial and political functions have always been intermingled.” Chartered by the Crown to serve the interests of the Crown, the East India Company didn’t hesitate to call upon the Crown when it needed money, supplies, or military and police protection it could not provide itself.

The company did precisely that in 1773, when it called upon Britain to close Boston Harbor and send additional troops to protect its interests in the colonies.

Likewise, Target has contributed to a number of police-related projects in Minneapolis over the years. For example, Target’s $300,000 donation to the city’s police department allowed the MPD to launch a surveillance camera setup in downtown Minneapolis.

Both entities are private companies, not official government bodies. But both also contributed significantly to “the source of the problem”: British tea taxes on one hand, police brutality on the other.

Both events happened after years of more peaceful attempts to resolve the issues went unheeded.

In every conversation I’ve had about George Floyd’s death, the words “Why can’t they protest peacefully?!” make an appearance.

The short answer is they have. For over eight years. And not only have police killings failed to decrease significantly, in some of those intervening years, they actually went up.

Since at least 2012, protestors have been peacefully demanding that their government address a problem that repeats itself again and again – the problem of government law enforcement officers committing homicide against black people, out of all proportion to black people’s actual numbers in society, and getting away with it.

The Boston Tea Party wasn’t a one-off property-damage spree, either. It followed years of protests against a problem that repeated itself over and over – the problem of the British government imposing onerous legal obligations on American colonists, out of all proportion to those colonists’ actual numbers in society. (Many of the protested obligations were taxes, but not all of them – the Quartering Act of 1765, for example, forced colonists to provide room and board to British soldiers.)

In both cases, peaceful means of getting government leaders to change an oppressive situation were not working. Neither had previous less-peaceful protests – Minneapolis was preceded by Ferguson, for instance, while the Boston Tea Party was preceded by the HMS Romney incident and the Battle of Alamance.

In both events, some participants had mixed motives.

There is a counter-meme going around, in the format of the one above, that includes this passage from the Boston Tea Party Museum website:

Besides the destruction of the tea, historical accounts record no damage was done to any of the three ships, the crew or any other items onboard the ships except for one broken padlock. The padlock was the personal property of one of the ships’ captains and was promptly replaced the next day by the Patriots. Great care was taken by the Sons of Liberty to avoid the destruction of personal property – save for the cargo of British East India Company tea.

The counter-meme seeks to draw a distinction between Minneapolis and the Boston Tea Party, by implicitly condemning the damage done to the Minneapolis Target store and other businesses. The implication is that if the Minneapolis protestors were “legitimate” freedom fighters, they’d have destroyed the contents of that Target store, then tidied the building before they left it. Instead, the argument implies, the protestors enriched themselves by stealing the goods for their personal use – which makes their protest suspect, if not outright invalid.

The parallel does break down here. While Target owns its store buildings as well as the goods inside them, the East India Company did not own the ships that were boarded. The Dartmouth, the Eleanor and the Beaver were actually built in the colonies and owned by colonists. The Boston Tea Partiers thus had an incentive to treat the ships well that those involved in the Minneapolis Target looting did not.

But even if the Boston Tea Party participants took excellent care of the ships (while destroying their cargo), their motives weren’t entirely pure either. Both John Hancock (who signed the Declaration of Independence) and Samuel Adams (the guy on the beer) had well-organized tea-smuggling outfits that were directly threatened by the enactment of the Tea Act. They directly, personally benefited from destroying a large shipment of East India Company tea.

Maybe no one carried any tea off those ships, but at least a few of the participants got richer for destroying it.

A modern-day parallel would be Wal-Mart organizing the looting of the Minneapolis Target store. Yet that store’s destruction wasn’t organized by people seeking to protect their own monetary interests. It was looted by people who are fed up with seeing police officers kill black people with impunity.

One: Looting, vandalism, breaking and entering, and the like are property crimes. They are, by definition, not “violent crimes.” Kneeling on someone till they suffocate is.

I still think the looting was wrong!

That’s your prerogative. Keep in mind, however, that if you want property destruction to stop in this instance, the best way to do that is to fight for the changes required to stop police from killing any more people – black or otherwise – in their custody.

End the killings, and you end the protests. You may not control that entire solution – but you can control the role you play in reaching it.

*As of press date, we still don’t know if the charge or conviction – if any – will be murder or manslaughter. “Homicide” covers both while still indicating the death was intolerable in a civilized society.

I’m donating all my writing royalties this quarter to bail funds for protestors. That includes contributions made via Ko-Fi. You can also share this post on social media.